Two weeks ago, Vidya and I went to a “More than Mindfulness” conference at Rainbow Community School in Asheville. Each morning, the kids there start their day with a centering activity, and we got to watch what those were like. The teacher leads an exploration, story, or activity to start the day.

We were really thankful that we were able to observe the teachers and kids in the classroom, and watched some neat activities we wanted to offer to our kids at Mosaic. I learned about a Waldorf-inspired story about how apples got their stars and decided to offer it to the kids learning Spanish and German at school so they could learn some new vocabulary, hear the story, and eat a snack together.

I read the story using props for the characters and silks for the background. Some words in the story were said in Spanish and German, and these words were also printed out on paper in front of the kids listening. Here is the story:

Once upon a time, there was un árbol/baum growing in a field. El árbol/baum was a happy arbol/baum most of the time. Each día/tag it enjoyed feeling the warm sun’s rays upon its branches. It loved the gentle breezes that tickled its leaves. However, as the sun set each día/tag and los estrellas/sterne came out in the sky, the arbol/baum felt a deep longing. It tried every noche/nocht to stretch taller and taller and taller. It wanted one of the beautiful twinkling estrellas/sterne for itself. After many weeks of this, one noche/nocht, as the arbol/baum was stretching itself upwards, a had/fee a flew from around the hill to ask el árbol/baum what it was doing.

“What are doing, dear árbol/baum?”

“I want una estrella/stern. I want one so badly.”

“Oh dear árbol/baum, don’t worry. I will grant you this wish. All you need to do is focus on growing delicious manzanas rojas/rote apfeln. If you do that, your wish will be granted and you will have your very own estrella/stern.”

Then one day un madre/mutter and her hija/tochter came walking along the field.

“I’m sorry, hija/tochter. I don’t have any food.” Her madre/mutter replied.

El árbol/baum heard this and stretched one of its branches down to the hija/tochter, giving her one of its shiny manzanas rojas/rote apfeln.

“Give it to me, hija/tocther, I will cut it for us to share.”

“Madre! Madre! Mutter Mutter” her hija/tochter cried, “Look! There is un estrella/stern inside my manzana/apfel.”

El árbol/baum looked down at the manzana/apfel and realized that its wish had been granted after all! Inside each of its manzanas rojas/rote apfeln was a tiny estrella/stern.

I don’t really know German, so it was challenging to figure this part out! Thankfully I had help from another adult who helped me with this part. After the story I held up the tree, fairy, mother, daughter, the backdrop for the day, night, star, and pointed to the color red. The kids called out what the word for those items were in Spanish or German, depending on which language they have been practicing. I also told them how in Spanish they would say “manzana roja” or “apple red,” reversing the noun/verb order we use in English. German does not do this.

Finally, I asked the kids if they wanted to see if there were really stars inside the apples. We cut them open and… 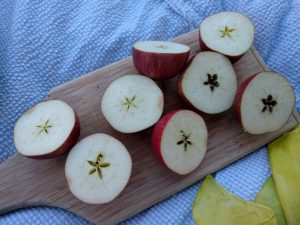 Then we all enjoyed a snack of apples and roasted pumpkin seeds together! 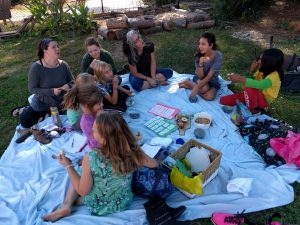 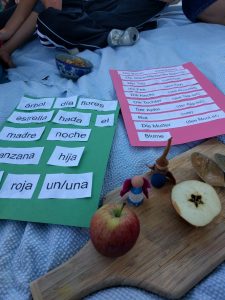