We started our 4th year of Mosaic on Wednesday, and it feels SO GOOD to be back to school! Actually, it really doesn’t feel like back to school because I’ve seen so many of the kids over the summer.

We ended the school year June 17. I took a week to see my sister in Colorado, and then I facilitated two week-long summer camps with lots of ALC students after I returned. After that, ALF Summer (3 weeks) began, a week with adults, a week with the kids, and another week with adults and @libby. Directly following ALF Summer, @Jesslm and I took 7 students on a 8 night, 9 day roadtrip adventure, which I absolutely loved doing! We got back on August 9 and school started August 24, so I had about two weeks of “downtime” as I waited for the school year to start back up. I feel really great about how I spent my summer. It feels easy starting school again because I honestly didn’t take much of a break from my regular routine of waking up and being with kids. I also genuinely like being around the kids, many of whom I’ve known for years now.

There has also been a big surprise that happened about a week before we re-opened, adding to the ease of starting the year: Melissa, who has been volunteering for the past year, let us know that she wanted to ALF full-time. She acknowledged our situation of not having the finances to pay a full time staff member, especially with the exciting one campus news, by saying that she wants more responsibility at no cost to us. Her intention is to dive back into education (which was her prior career path before being disillusioned by it – something I totally get) and to work with kids again in a school that she is inspired to help make more awesome.

Jess and I were prepared to start the year with 9 or 10 kids in a spawn point, and just making that work. However, with Melissa around full time, excited to facilitate a third spawn point, we’ve been able to start with just 6 or 7 kids in a group instead. On Friday after school, I got to listen to a couple students excitedly share how they feel spawn points are so much easier and more fun to be in with fewer kids. They have time to share intentions and reflections and to play games together, or just hang out and talk. I’ve felt this way too, happy and excited to go to spawn. This is really energizing for me.

Highlights From The Week

There is also a lot of ease in starting our 4th year, and 3rd year in this particular building, with a large group of students who have been in together for at least two years. We can more quickly dive into creating what we want because we don’t need a lot of time spent on figuring out what agreements we need in the space.

In the short span of three days, the kids jumped right in to reinstate the offerings they liked from last year. They met to plan what books they wanted to read for the Book & Movie Club, met with Jess to talk about what kind of hikes they want to do this year, a student led a Writer’s Workshop meeting where she facilitated a conversation about what kind workshop they would start out with, and Tomis met twice with our oldest students as he starts piloting the “Wings” (working title) program here at Mosaic. 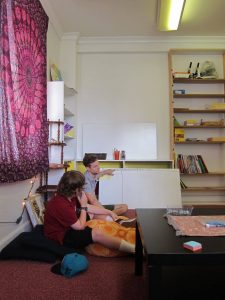 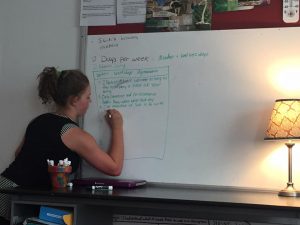 This week, we also had a lot of conversation about the trees getting cut down at the church. In particular, a huge tree that we played around and enjoyed the shade from, led to feelings of sadness and frustration. As the kids played on the trunk, using it as their own personal jungle gym, they talked of protesting and asked a lot of questions. While I listened to some conversations, I felt really grateful that the kids could see this happening and then take the time to talk about it and to go out and interact with the tree, rather than left to watch it happening from indoors and being told to think about some other subject.

My favorite conversation from the tree went as follows:

Child 1: When I die, I want to come back and live as a tree.
Me: Can you say more about that?
Child 1: Because trees live so long and I want to know what it’s like to live as long as they do and experience what they experience.
Child 2: I would want to come back as an animal because I want to move around. Being a tree might get boring.
Child 3: But what if the tree doesn’t know that its life is boring? What if they would think walking and talking was boring? Because the tree is just seeing life through its own perspective. 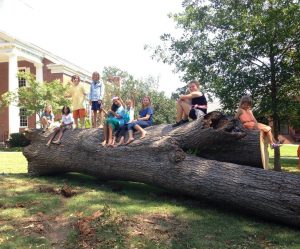 The time and space the kids have to discuss how a tree may perceive the world is something really valuable to me. I want to see more gentle discussions in the world where we are wondering how an experience might be for someone else. From personal experience, I know that rushing through life and trying to “prove” my worth (mostly by being a good girl who got good grades) led me to grow into a more self-centered person than I’d like to admit. Most of my 20’s involved understanding how I became what I became, learning to not beat myself up for how I became that way and then rebuilding. I can see that we are building a group of kids who have the time to think about more than just themselves, and this feels really good.

During the first ALF Summer, Sara S. (an aunt of two of our students who is getting a master’s degree in creativity), came and presented a workshop on The Creative Problem Solving (CPS) Process. It was really fun and since then, she’s come in a couple times to facilitate this process.

Coming back to school, the kids were all really excited about our new home and want to feel like they can help in some way. I also had several parents reaching out to me with ideas for ways the kids could get involved. Whatever happened, I really wanted the kids to be involved because they were inspired to action rather than adults suggesting they do something we thought was a good idea. So I thought it was a good time to get the kids and staff who were interested in more discussion to experience Sara’s CPS process and see what happened from there.

I took key elements of what I learned from Sara and tried to deliver a simplified version of what I felt capable of doing:

First I told the kids we would warm-up our brains to think big and think creatively, just like our bodies need a warm-up before a work out, our brains need work outs too. I led them through a silly exercise (copied from Sara) where everyone had to help me think of solutions to a made up problem: a hippo was stuck in my bathroom, what should I do?

As the participants came up with potential solutions, I asked them to practice 4 key elements to help encourage people to think as creatively as possible:

Next, we practiced those same principles to come up with as many ideas as possible to try to help the school raise 45K in 45 days, our current fundraiser to help us renovate our building while still keeping tuition affordable.

The ideas were hilarious. When I reminded them to seek wild ideas, we got things like “pick pocket” and “have all the parents take all their money to Vegas and bet on red.” It was hard not to laugh at those! I appreciated how much fun we got to have while problem solving 🙂

I explained that we were going through a divergent process – where we are just generating tons of ideas, but that we would have to go through a convergent process of narrowing focus if we were actually going to be able to take action forward.

So after we had maybe 75 options down, I gave the participants stickers – telling them to only use 3-5 stickers to place on the ideas that they would like to have more discussion about. We then removed the ideas (which were on post-its) without stickers, posting them on a different board. I stated that they weren’t bad or good ideas, just ideas that we weren’t going to focus on now.

Then, I drew a line under each grouping to make two columns where we could identify the pluses (+) and opportunities (o) for each grouping of ideas. Rather than saying that something is a bad idea, we can frame that wording in a “How Might” statement that allows for more a more positive conversation. Rather than “well that idea is too hard because…” or “that idea isn’t good because…” we can say “How might we pull this off in time and find it energizing, rather than exhausting.” It’s just a little word-smithing that leads to more open conversation rather than a culture around shutting down an idea that someone thinks isn’t “good.” You can see our pluses and opportunities in this doc.

At the end of our time together, we decided we had a great start to show the rest of the community. Not all the kids in the school were a part of this brainstorming, so we decided to read over our thoughts to all the kids in the three separate spawn points the next morning, and then have part of our change up meeting dedicated to next steps.

After being read the ideas in spawn point, one student built on what they heard and was excited to propose at change up The Spicy Pepper Challenge! This student and their friends have been bringing spicy foods to school for a year now, and they really enjoy seeing how spicy of food they can handle. One of these students has a goal this year of seeing if meditation will help them handle spicier food! After discussion at Change Up, the kids felt like launching the social media challenge was something they could do without adults helping, while arranging a community event is something that is more adult involved. So they set a time the next day to figure out what they wanted to say and how to move forward. A couple kids went with me to the community garden to pick jalapenos too 🙂